its Self-drive Car was the most popular topic on the internet, Magazines, Television. The first self-sufficient and truly autonomous cars appeared in the 1980s, with Carnegie Mellon University. What makes this car run without control of a human. Is this Car successful and safe to drive?

What is Self Drive Car?

A self drive car,  a car that can drive without human control by sensing its environment to navigate. These cars control its actions through the use of cameras, sensors, radar and GPS units. Google self-driving cars project started by waymo in 2018. These cars are capable of making intelligent decisions such as using internal map of their region and using that map to find their path to the destination while avoiding obstacles from a set of possible paths.

This car uses a combination of sensors to sense the near objects and software to locate itself in the real world. This software uses Google maps for this purpose. The software can recognize objects, people, cars, road marking, signs and traffic lights, obeying the rules of the road and allowing for multiple unpredictable hazards, including cyclists. It can even detect road works and safely navigate around them. It also has advanced control systems for an understanding of information from the sensors. The data so obtained is linked with the map through a simultaneous localization and mapping algorithm thus creating a clear picture of its surroundings. 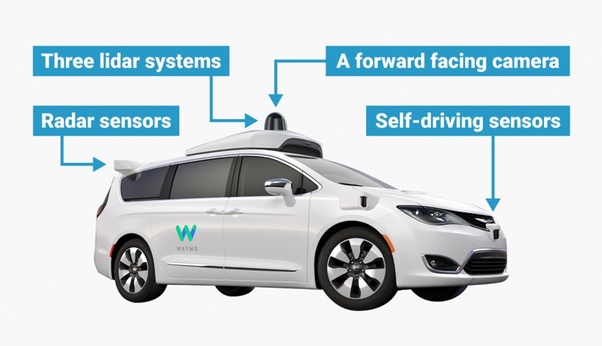 What are the Components that instruct a Car to drive?

The process of self drive makes the use of these components. First is an obstacle detection unit which contains Radar, Sonar, Cameras, and a Laser. This becomes the eye of the driverless car that let it view the outside world.

Laser: This is beam other electromagnetic radiation that is used to measures the distance between the car and other objects. It is mounted at the roof of the car.

Radar: It is a device for detecting the presence, direction, distance, and speed of objects, by sending radio waves. These radio waves are reflected off the object back to the source. These radars are installed at the front and back side of the car and on the sides of the bumper.

Camera: Camera is used for taking clear images of objects. It tells us clearly the objects length, height, and width. Different types of cameras are installed at various locations in the auto-controlled car.

Sonar: a system for the detection of objects by emitting sound pulses and detecting or measuring their return after being reflected.

You are thinking why there are multiple things for detecting the objects. The reason behind this is to identify all the objects on the road. It can also detect rain sonwfall and fog by laser light beam to work according to the situations.

Maps: To trace the destination.

What are the advantages of Self Driving Cars?

Reduce Congestion:  It will reduce traffic jam on roads because each car will follow traffic rules and thus preventing blockages caused by driver’s ignorance.

Good for Handicapped;  Because the vehicle can drive by itself so it is comfortable for disabled individuals to operate.

Improvement in  Accidents: This operates on a set of instructions with controlling speeds so there will be reduced in accidents.

Is it safe to drive the auto-controlled Car?

Any programmed device can create a fault due to which it does not function according to the instructions. This may lead to accidents, injuries or even worse loss of lives.